#1 – The cost of the tattoo is donated to the One Orlando fund.

#2 – The pain I feel under the needle will serve as a reminder of the pain the victims and their families are going through. And as I feel that short term pain I will remember how blessed I am to not be suffering their fate.

#3 – The pulse line etched into my skin will remind me that every day I wake up with a pulse is a blessing.

#4 – The rainbow will remind me not to judge or be biased towards someone or a group of people because they live differently from me.

#5 – The rainbow will remind me to be brave and dedicated enough to live my authentic life.

#8 – When, and if, my kids ask about the tattoo on my ribs I can tell them about this week. I can tell them that there is great evil in this world, but there is also great good. And beyond that simple fact, every day we wake up with a pulse we have a choice to choose love. I look forward to telling my children that they have that choice.

#9 –  “You realize, don’t you, that you are the temple of God, and God himself is present in you? No one will get by with vandalizing God’s temple, you can be sure of that. God’s temple is scared – and you, remember, are the temple.” – 1 Corinthians 3:16-17

This scripture is the one most church kids hear as the argument against tattoos. ‘Your body is a temple’ is drilled into your brain to cover a whole manner of sins. Yet as I’ve prayed about this decision I’ve come to the conclusion that this scripture essentially boils down to respecting your body and using it to honor God. Well, If God is love and that is his main attribute I am striving to emulate – then this tattoo, which to me will be a permanent reminder to choose love, will in turn be a permanent reminder to choose Him.

#10 – Choosing to get this tattoo at this time will remind me of how capable Orlando and the world is to come together and choose love.

Those are my reasons, and I don’t think I’ll ever regret this decision (a year on and I love my tattoo). Besides, if this time has proved anything it’s that we never know when our time is done. And when it is our bodies will fade into nothing, so it might as well stand for love while it’s here. 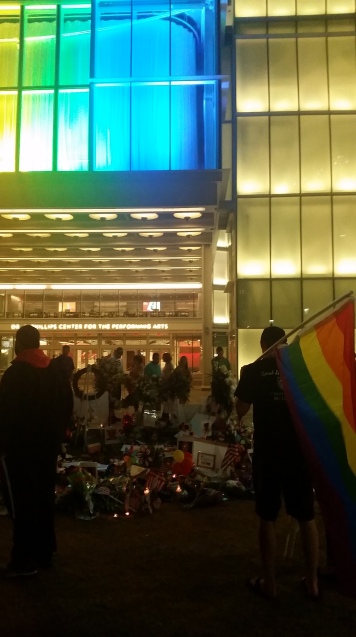 In five days we will have elected a new president, I’ll keep my thoughts on that for another post, but as we move this country in one political direction or another I believe we have to seriously consider the gun violence in this country. This summer, almost six months ago, I was in Quebec City, Quebec (CA) with my big brother. We had been in Canada for a week to have a holiday and to see Mumford and Sons. At 6 am on Sunday June 12th I woke up in a hostel in Quebec to my sister (who was in Orlando) messaging me telling me to make sure everyone I knew that went to Pulse was safe. Pulse was a place I frequented and had been many times with friends. I spent the next hours watching my city on the news and frantically trying to make sure everyone I knew was okay. To see my city, to see Pulse (which is only a few blocks away from my apartment) in total terror was an experience that will never leave me. I couldn’t comprehend that my home was now the site of the worst mass shooting in U.S history, but it was happening whether I could comprehend it or not.

So, as the days progressed I kept a journal. I’ve been wanting to share this with the world for some time now, but have managed to keep putting it off. I will be posting what I wrote over the next few days, partly I suppose as therapy for me, but more so as a glimpse into the emotion that comes from such a tragedy and how it feels to have your city ripped apart. I think as we move forward it’s important to realize what one man with an assault weapon can do and if we, as a nation, have the guts to stand up to the NRA etc. and make a change. I hope this series allows you to reflect, but beyond that I hope it keeps the memory of the 49 alive.

I’m going to begin with something I wrote a couple of days before while sitting in Notre-Dame Basilica in Montreal. I’m including this to show how quickly life can change.

Sometimes there are places that are too beautiful for words – places that have been cast in hours of toil, worship and artistry.

Perhaps, it’s because I’ve always found him in the small quiet spaces in the back of my mind; not in grand halls where pious men felt the need to show their wealth and stature, to show how holy they are simply by the act of building something physically beautiful.

However, as much as I detest these men, as much as I wish they would have never existed, I cannot help but have a touch of thankfulness for them.

For, if they never existed places like this would never be.

And if they never existed, I could never sit here, in a smooth oak pew, looking up at a divine altar carved from one tree, with the colors of a night sky bleeding out behind it, feeling the weight of hundreds of years of worship in one quiet moment.

This is the legacy of places like this, but this one, yes this one, is just a little more beautiful than the rest.